Mike Moreu is a cartoonist for local rag The DomPost.* His blog profile on Stuff says

Mike Moreu is a full-time editorial cartoonist with a passion for using funny pictures to make serious points.

Which would seem a fairly textbook description of a political cartoonist, yes?

So I can only assume I’m missing a) the funny and b) the point: 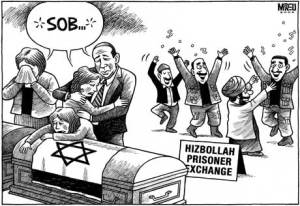 "Two sides of the same coin"

It’s, um, funny because people are dead. Specifically, Israeli people? And, um, the implied irony of Israelis releasing live prisoners and Hizbollah executing prisoners is, I guess, really hilarious? Or just smirk-worthy? And the point … is that Hizbollah are bad and Israel is totally morally in the clear with regard to Middle Eastern conflict? Wow, what breathtaking insight. What an amazing, incisive depiction of complex situations that’s truly made me think about the situation in a new light – oh, sorry, no, my actual response was “Wow, if we’re just going to incite more conflict, could we at least have some kind of punchline?”

Then there was this. Now, I don’t know how y’all are feeling about the New Yorker “Obama is a flag-burning African princeling and Michelle Obama is a scary Black Panther time-traveller” cover, but my personal take is that, if you have to keep shouting “IT’S A SATIRE, HONEST” then you aren’t doing it right. 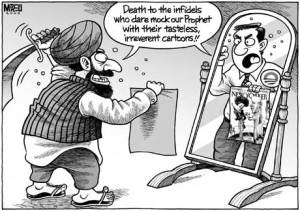 "Man in the mirror"

Um … I guess it’s funny if you honestly believe the New Yorker cover in question a) isn’t offensive or b) isn’t a really, really pathetic attempt at “satire”? It’s funny because all Muslims are automatically Arabic and look like extras out of Disney’s Aladdin? All Obama supporters are irrational white men now? And the point is … that Muslims and Obama supporters just don’t have a sense of humour? Or just that Obama supporters = violent terrorists?

Still, this is the work of the man who thought this would be not only appropriate but funny:

Get it, get it? Because TVNZ is like a woman who was hospitalised with four broken vertebrae after being repeatedly kicked by her ex-partner! IT’S SO FUCKING EDGY!

Of course, Mike has to admit, in a blog post literally entitled “A hard-hitting topic”**

However, Andrew at The Press didn’t quite concur. He thought, while it was definitely provocative, that the battered woman crossed a line of good taste and that it in fact detracted from the message since readers would have a hard time getting past the picture and seeing that I was talking about TVNZ’s image – despite the words clearly on her shirt.

It is truly saddening to see this man’s pointed commentary being possibly censored all because some over-sensitive whiners might overlook the words clearly on her shirt and find the image of a beaten woman disturbing. In centuries to come, our descendants will wonder why we could not give this man free rein to explore the outer edges of making abuse funny.

But have no fear, in case you were thinking, “Hey, Andrew at The Press, good job drawing a line against tasteless exploitation for the sake of “humour”!” Because he and Mike got together and reached a compromise – after all, this was “too important a topic not to tackle”.***

So just to make the point clearer for the thickies, the final result was this:

Oh, this is so much better.

That’s Mike Moreu, ladies and gents. And lest you are not yet quite convinced of how much he deserves to get paid to do this full-time, let us not forget his ability to condense the ordinary poo joke into a comedic tour de fucking force of hard-hitting political analysis:

*Dominion Post for those of you playing outside of Wellington/NZ.

**DOMESTIC VIOLENCE PUNS ARE AWESOME! ARE YOU NOT BLOWN OVER BY HOW BRILLIANT HIS WIT IS???

***Please to remember the cartoon is meant to be a commentary on TVNZ’s reaction. Not, you know, domestic violence, the covering-up thereof, or the effect of any of this on the actual victim.